The Not To Be Millionaire

NEW YORK - Idaho resident Kathy Evans brought humiliation to her friends and family when she set a new standard with her appearance on the popular TV show, 'Who Wants To Be A Millionaire.'

It seems that Evans, a 32-year-old wife and mother of two, got stuck on the first question, and proceeded to make what fans of the show are dubbing 'the absolute worst use of lifelines ever.'

After being introduced to the show's host Meredith Vieira, Evans assured her that she was ready to play, whereupon she was posed with an extremely easy $100 question. The question was:
'Which of the following is the largest?'
A) A Peanut
B) An Elephant
C) The Moon
D) Hey, who you calling large?
Immediately Mrs. Evans was struck with an all consuming panic as she realized that this was a question to which she did not readily know the answer.

'Hmm, oh boy, that's a toughie,' said Evans, as Vieira did her level best to hide her disbelief and disgust. 'I mean, I'm sure I've heard of some of these things before, but I have no idea how large they would be.' Evans made the decision to use the first of her three lifelines, the 50/50. Answers A and D were removed, leaving her to decide which was bigger, an elephant or the moon. However, faced with an incredibly easy question, Evans still remained unsure.

'Oh! It removed the two I was leaning towards!' exclaimed Evans. 'Darn. I think I better phone a friend.'
Using the second of her two lifelines on the first question, Mrs. Evans asked to be connected with her friend Betsy, who is an office assistant. 'Hi Betsy! How are you? This is Kathy! I'm on TV!' said Evans, wasting the first seven seconds of her call. 'Ok, I got an important question. Which of the following is the largest? B, an elephant, or C, the moon. 15 seconds hun.' Betsy quickly replied that the answer was C, the moon. Evans proceeded to argue with her friend for the remaining ten seconds. 'Come on Betsy, are you sure?' said Evans. 'How sure are you? Puh, that can't be it.' To everyone's astonishment, the moronic Evans declined to take her friend's advice and pick 'The Moon.' 'I just don't know if I can trust Betsy. She's not all that bright. So I think I'd like to ask the audience,' said Evans.

Asked to vote on the correct answer, the audience returned 98% in favor of answer C, 'The Moon.' Having used up all her lifelines, Evans then made the dumbest choice of her life. 'Wow, seems like everybody is against what I'm thinking,' said the too-stupid-to-live Evans. 'But you know, sometimes you just got to go with your gut. So, let's see. For which is larger, an elephant or the moon, I'm going to have to go with B, an elephant. Final answer.'

Evans sat before the dumbfounded audience, the only one waiting with bated breath, and was told that she was wrong, and that the answer was in fact, C, 'The Moon.' 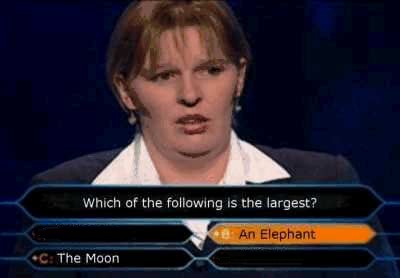 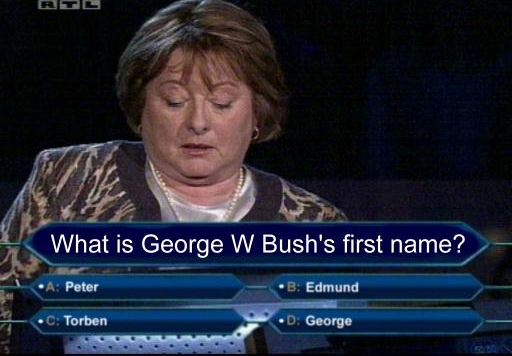 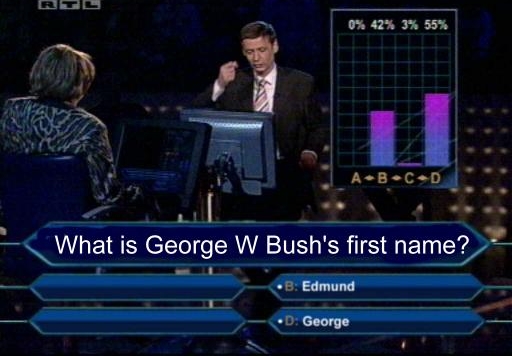 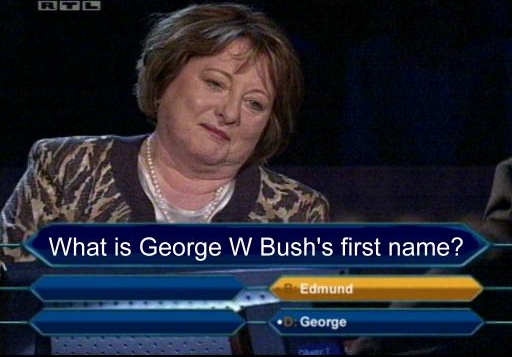 After drinking that one, he looks in his shirt pocket again  and asks for another beer. This happens about another seven times before the bartender asks him, "Why do you keep looking in your pocket?"

The man replies, "I have a picture of my wife in there. When she  looks good enough, I'll go home."

1. You know, stop lights don't come any redder than the one you just went through.

2. Relax, the handcuffs are tight because they're new. They stretch after awhile.

3. If you take your hands off the car, I'll make your birth certificate a worthless document.

5. Can you run faster than 1200 feet per second? Because that's the speed of the bullet that'll be chasing you'

6. You don't know how fast you were going? I guess that means I can write anything I want to on the ticket, huh?

8. Warning! You want a warning? OK., I'm warning you not to do that again or I'll give you another ticket..

9. The answer to this last question will determine whether you are drunk or not. Was Mickey Mouse a cat or a dog?

10. Fair? You want me to be fair? Listen, fair is a place where you go to ride on rides, eat cotton candy and corn dogs and step in monkey poop.

11. Yeah, we have a quota. Two more tickets and my wife gets a toaster oven.

12. In God we trust, all others we run through NCIC.

14. No sir, we don't have quotas anymore. We used to, but now we're allowed to write as many tickets as we can.

15. I'm glad to hear that the Chief (of Police) is a personal friend of yours. So you know someone who can post you r bail.

16. You didn't think we give pretty women tickets? You're right, we don't. Sign here.